Olympic Taekwondo Academy is owned and operated by Cheshire residents Master Jonguk Jang and his wife, Hyun Jung An.

The Olympic Taekwondo Academy organization (OTA) was started in 2009 by Grandmaster Kiye Cho.  There are seven affiliated locations in Farmington, Rocky Hill, New Milford, Cheshire, Simsbury, Glastonbury and Southington.  Grandmaster Cho and Master Jang are no strangers to Cheshire.  For the three years prior to opening the first OTA in Farmington they men worked for another Taekwondo organization in town and have desired to return ever since.

Master Jang and his wife are originally from South Korea where they both studied Taekwondo from an early age.  Master Jang received a Bachelor of Physical Education with a major in Taekwondo from Kyung-Hee University in South Korea. He currently holds a sixth degree black belt with a Master Instructor certification from Kukkiwon, the headquarters of the World Taekwondo Federation (WTF).  The WTF is the worldwide governing body for all of Taekwondo including Olympic competition.  In addition, he has certifications for teaching, coaching, and refereeing in both Korea and the United States as well as a black belt in Judo.Master Jang is recognized in Korea and around the world as a competitor, coach, referee and instructor.  He has been successful in all four Taekwondo competition styles (forms, sparring, breaking and team demonstration).  As a competitor and coach, he has won gold medals at many Korean national and international tournaments and has traveled around the world demonstrating and teaching Taekwondo to others.


Olympic Taekwondo Academy is member of the
World Taekwondo Federation 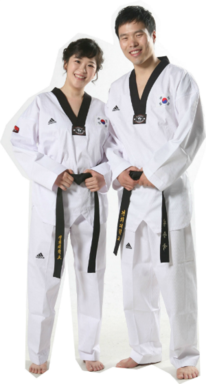